The cryptocurrency market seems to have received a saving grace with almost all the coins seeing green across the spectrum after a rough week. The concerns related to the past two weeks, which witnessed a lot of support breaks and massive price drops, seem to have been put in the past, with the market undergoing some recovery. Bitcoin [BTC], which sparked the crash, looks to be gaining at a healthy 7.78%.

At the time of writing, XRP was growing by $8.28, with a total market cap of $15.084 billion. The cryptocurrency was trading for $0.374 with a 24-hour market volume of $1.106 billion. XRP’s current hold below the $0.4 margin has resulted in a lot of people buying into the Chris Larsen-led cryptocurrency.

A majority of XRP’s trade volume was held by Bitbank, with a hold on $181.692 million of all trade. Bitbank was closely followed by ZBG, with the exchange controlling 10.04% of all the XRP trade.

XRP was also in the news recently when Cory Johnson, the CMO of Ripple, talked about the benefits of blockchain in finance and how the current setup can be vastly improved. He had said:

Another cryptocurrency that was bullish was the Vitalik Buterin co-founded Ethereum [ETH], which was on the rise by 8.11%. The cryptocurrency had a total market cap of $11.909 billion and was trading for $115.15.

A majority of the cryptocurrency’s $2.305 billion trade volume was held by Coinbit, which had a grasp on $336.518 million of all ETH trade. Next in line was Bitfinex, on which 4.12% of all Ethereum trade was taking place. 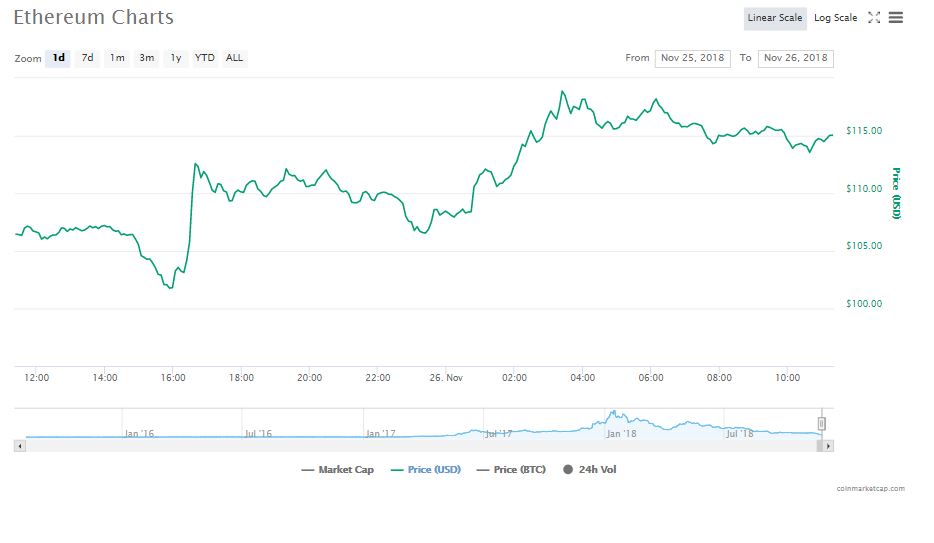 Ethereum’s fall was also pointed out by Nick Core, a trader, and statistician at Ecosystems LLC, who had said:

“There was a major sell-off last night. Ethereum will still have growth but I don’t think it’ll have the growth I had on the last bull run because there’s less ICOs built on it. As for the scenario now I am looking for a 109 to 120 as our next potential bottom again as we approach. I may adjust that target but that’s what I’m seeing right now.”

Ethereum based MakerDAO’s $300B goal is unrealistic – AMBCrypto English

Ethereum Rallies Above $220 And Likely To Continue Higher To $240

Bitcoin has to pass the $10,500 level before going to rally, here’s why