The Ethereum block difficulty began to grow back in November 2016. Since then, developers have been constantly forced to carry out hard forks to keep the network up until the transition to a proof-of-stake algorithm takes place.

In the lead-up to the Istanbul upgrade, implemented on Dec. 8, the Ethereum team decided again to postpone the explosion of a so-called “difficulty bomb,” which some believe may lead to the onset of an Ice Age. How can this happen and what would be the consequences if the Ethereum network froze?

When creating Ethereum (ETH), the developers initially assumed that it would work on a proof-of-stake consensus algorithm. However, as this idea implementation demanded more time, the network was launched on the more familiar consensus model: proof-of-work.

At the same time, the developers prudently introduced a difficulty bomb into Ethereum — i.e., a mechanism that is supposed to gradually make the process of generating new blocks more complicated, which would gradually lead the network toward PoS.

Related: Istanbul to Berlin: Ethereum Milestones on the Road to Serenity

Initially, the bomb was supposed to explode after Ethereum would be ready to work on the new algorithm called Casper, and provoke the so-called Ice Age — a transitional stage during which mining new coins would become difficult and unprofitable. Theoretically, this procedure should force miners to switch to a new chain, instead of maintaining the old one.

However, due to the delay in the development of the PoS mechanism, the transition to Ethereum 2.0 is constantly being adjourned. At the same time, the difficulty bomb has been about to explode several times and the Ethereum team has been constantly delaying it by conducting hard forks, so as not to frighten miners supporting the stability of the network ahead of time.

What are the dangers of the Ice Age?

Vitalik Buterin, one of the co-founders of Ethereum, had previously predicted the fall of the network to take place in 2021, as it will become almost frozen due to a difficulty bomb. However, while the events and landmarks in the Ethereum project are developing faster than expected, while the process of the PoS network transition fails to meet the deadline.

In April 2019, the ETH network difficulty began to grow again, with the current value of around 2,498 terahash per second (with one TH/s equal to 1 billion hashes per second). What’s more, if the growth trend remains the same, the Ice Age can occur much faster than the appointed date. This can lead to miner withdrawal, reduced scalability and even a network crash.

The postponement of the Constantinople hard fork to January 2019 led to a drop in the number of ETH mined per day, as the ETH supply saw its value decrease by 35% in just two months. Mining had become more difficult, and as a result, the daily issuance of the cryptocurrency fell from 20,000 ETH in January to 13,000 ETH in March. Now, the daily value comprises 11,872 ETH and continues to decline further. 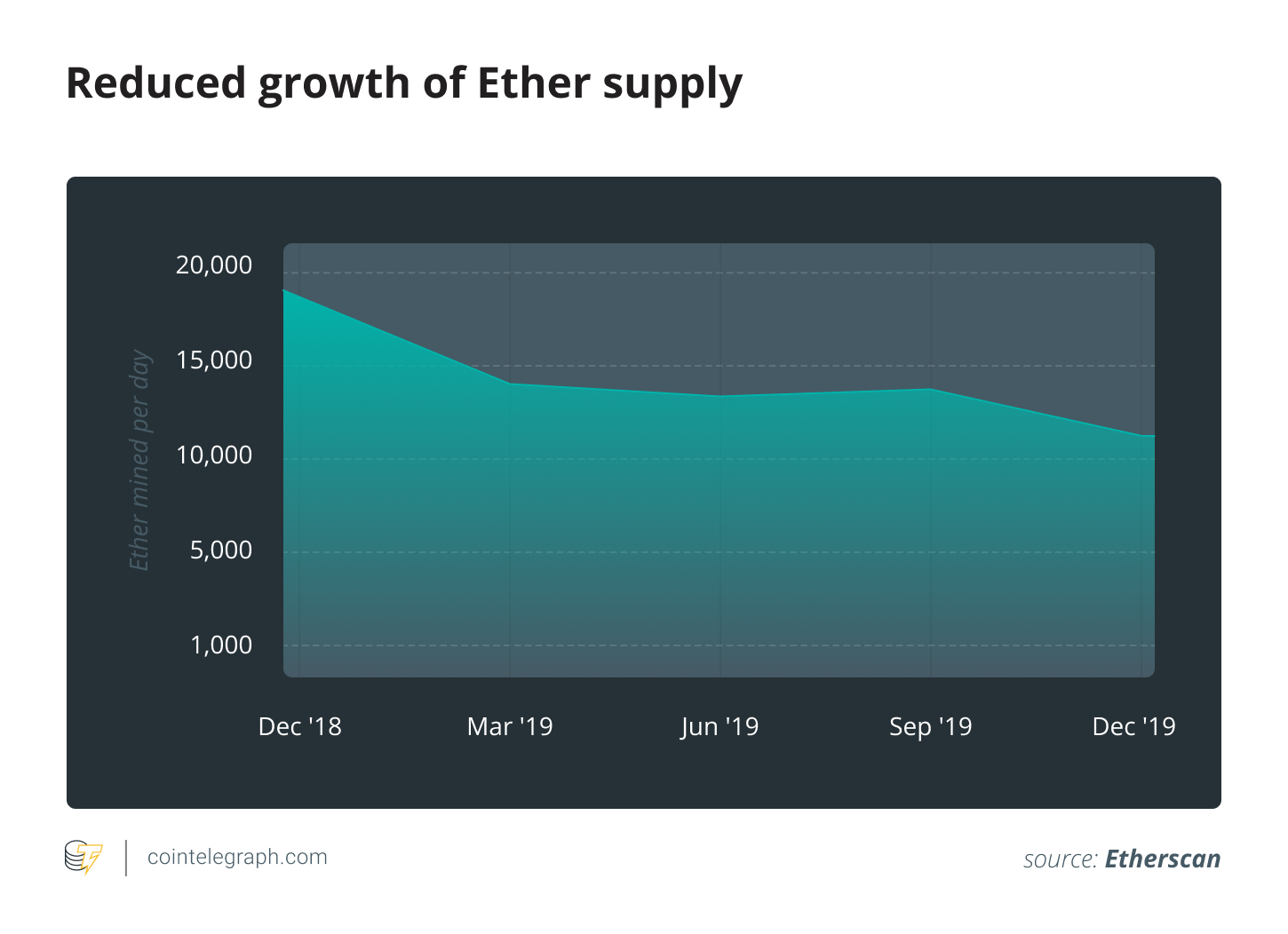 The current situation has already raised concerns among miners. What’s more, the coming months may become critical for the mining industry if the ETH developers and network participants fail to find a compromise.

According to Susquehanna, a global trading firm, since November 2018, ETH mining using video cards has reached zero profitability. In less than 1 1/2 years, the average monthly ETH production profit per GPU has fallen from $150 to zero. 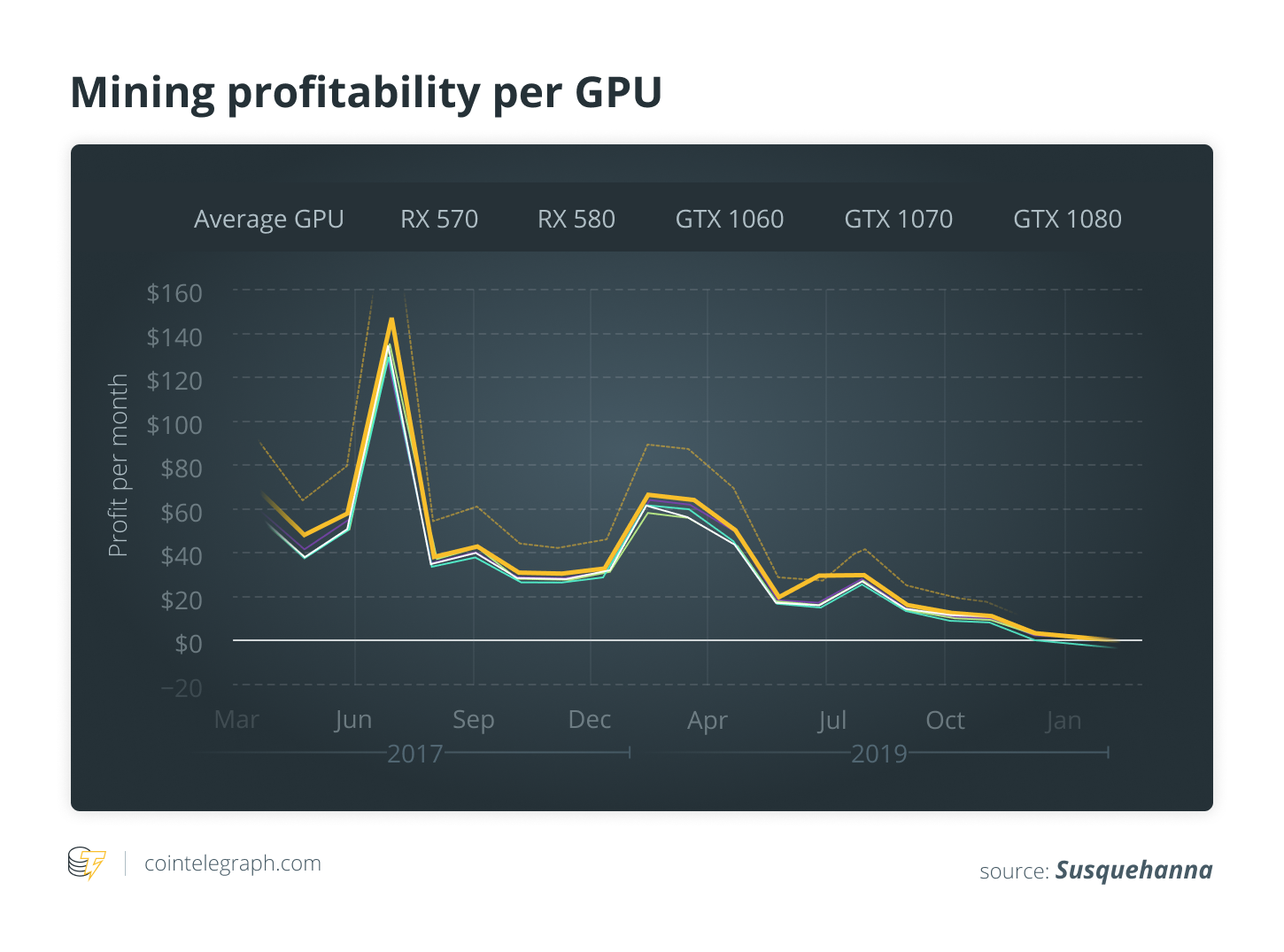 The market is affected not only by the increasing block difficulty and competition in the mining equipment industry, but also by the superiority of Bitmain and its new Antminer ASIC miners. Another decisive factor is the price of the second-largest cryptocurrency, which fell around 10 times from the levels seen in December 2017, when it stood at $1,401.

The activation of the difficulty bomb could make mining even more unprofitable, which could lead to miners leaving the network and individual pools dominating the market. Even partial withdrawal of miners can jeopardize the security of the Ethereum blockchain, as well as increase the likelihood of a 51% attack — similar to the one that occurred on the Ethereum Classic network.

At the same time, many miners are betting on another potential update called ProgPoW. This upgrade involves replacing ASIC miners with more traditional equipment like the video cards. However, its implementation in the Constantinople update has not yet been planned.

Notably, while in the event of the voluntary refusal of miners to support the network, there will still be those who will ensure its operation — but with the full onset of an Ice Age, mining will simply become impossible.

Some experts, however, believe that the difficulty bomb mechanism is a necessary procedure designed to ensure the transition to PoS, and it should not scare the miners. For example, Vlad Miller, CEO of blockchain platform Ethereum Express, told Cointelegraph that many miners will still be able to continue operating:

“The transition of ETH to PoS is not only inevitable, but also an integral step for Ethereum development.”

Miller went on to add that despite the fact that mining as it is now will become less attractive, in the long run, the change will prove to be worth it because electricity costs will be reduced and the likelihood of a 51% attack will be lower. He went on to add:

“Neither the Ice Age nor Ethereum 2.0 mean the end for miners. Many of them will switch to mining other coins, such as Zcash or Ethereum Classic. Those who are mining Ether, have nothing to fear in the near future. However, it’s important to ensure the mining equipment will be paid back before the transition to PoS is made.”

At the same time, an increase in block time leads to a decrease in the Ethereum network’s ability to process data. Nevertheless, the current limitations are set precisely taking into account the block time and can be changed if necessary. The only negative effect may be an increase in the confirmation time of a transaction. While the release of one block in the Bitcoin (BTC) network takes an average of 10 minutes, a time of one minute can be a viable approach for Ethereum, especially if its a temporary measure.

If the hard fork is delayed again, it could negatively affect the network bandwidth and lead to a rise in fees, since the complexity can increase to the level where production of one block will take about two minutes. Now, the Ethereum block production time, on average, is about 15 seconds, with the commission rate stable at half a cent.

An exponential increase in ETH mining difficulty will lead to an increase in the extraction time of new coins to prohibitive values. As such, blocks will be generated slower and transaction confirmation time will increase, making the network very slow or even forcing it to stop functioning.

The drop in the scalability of the Ethereum network due to a possible approach of the Ice Age could be tragic for decentralized applications. Today, Ethereum is a haven for numerous DApps — from various blockchain games and projects with their own tokens to increasingly popular decentralized finance solutions.

However, as the number of DApps grows, the Ethereum network will start to experience more and more problems with transactional throughput. Back in August, Buterin said that the Ethereum blockchain is almost full, which is cause of concern. Eric Conner, a product manager at Gnosis — a firm developing prediction markets applications — told Cointelegraph that DApps might feel the impact of the difficulty bomb, though it wouldn’t be that critical.

“For dapps really no direct impact but since there are less blocks a day, transaction fees on the network will slowly go up, which means over times dapps would get more expensive to use,” Conner claimed.

Whether Ethereum developers will be able to find a compromise in this situation is not yet clear. The resolution of the issue is further complicated by the possible consequences of the Istanbul hard fork. Some decentralized projects, such as Aragon and Cyber Network, fear that the update will disrupt their smart contracts and increase the cost of operations within the network by 30%.

Last week, the Ethereum developer team raised the issue of delaying the difficulty bomb again by proposing a hard fork called Muir Glacier. The discussion was held between not only platform developers, but also with miners and other market participants.

Among the possible solutions discussed were both a delay of difficulty bomb mechanism as well as its complete removal. In particular, Ethereum developer Aleksey Akhunov stated that the ratio of risk and profitability from using this mechanism is “not great so far.”

At the beginning of the year, Afri Schoedon, a former developer of the Parity Ethereum client, suggested completely abandoning the difficulty bomb and removing this mechanism from the protocol to eliminate the need to constantly delay its activation:

“I personally don’t want to deal with [the difficulty bomb] anymore. Serenity is not happening this year and most likely not next year. So why bother?”

However, not everyone agrees with this point of view. For example, Marcus Ligi, creator of the Walleth Android wallet,  believes that removing the difficulty bomb will lead to Ethereum network updates being implemented less often and, therefore, miners becoming less incentivized to update their software and equipment.

Therefore, network will significantly slow down, and there will also be a risk of boycotting the transition to updated versions of the ETH blockchain, in particular the one in which the PoS algorithm will finally be implemented. However, Conner from Gnosis, for example, opposes the complete removal of the difficulty bomb, referring to possible negative reaction from the community.

When is Muir Glacier expected?

While the Ethereum developers haven’t agreed on a long-term program for working with the difficulty bomb, in the short term, they decided to postpone this mechanism for a couple of years.

James Hancock, the coordinator of Muir Glacier, said that the hard fork would push the bomb “as far as is reasonable.” This will give developers time to understand whether it’s necessary to modify the Ice Age mechanism so that its behavior becomes predictable or else to completely remove it.

According to Tim Beiko, product manager at blockchain solutions firm PegaSys, the hard fork will be launched at block number 9.2 million, which will tentatively be generated on Jan. 6, 2020. If Muir Glacier succeeds, it will freeze the bomb until after another 4 million blocks, which means that Ethereum would not be threatened by the prospect of an Ice Age for the next couple of years. Conner expressed his expectations to Cointelegraph:

“There won’t be much impact felt before block 9.2mn. The worst we’ll see is maybe 18 second block times which isn’t enough to cause issue.”

Hudson Jameson, a core developer liaison at the Ethereum Foundation, shared the same opinion, adding that Ethereum users and miners should know that there are no critical threats posed by the difficulty bomb and that all it does is increase the block times. He told Cointelegraph:

Why Has The Ethereum Ice Age Been Delayed Over And Over Again?

Ethereum Price Plunges to $160: Can Bulls Save The Day?

New tool for OTC trade is based on Ethereum smart contracts