An Australian music platform has signed on some of the biggest names in electronic music and will pay artists around the world in real-time, as their music is streamed.

From festival to film placements, electronic artist and Emanate co-founder Jimi Frew has been a professional musician most of his adult life in just about every corner of the business.

No matter what level your working, the music industry comes with financial insecurity.

“You’ve probably seen Channing Tatum dancing to some of my work in the movie Magic Mike – and that’s something I thought I would never say,” Frew explained.

“I’ll tell you another thing, it took me two years to get paid. Being in the industry I’ve been through all the struggles … there’s always a big unknown if, or when, I will ever get paid.”

Artists often last to get paid

The $50 billion a year music industry is often known for putting artists last, with unfair contracts that let middlemen take the vast majority of the spoils.

Even with the best of intentions, the artist is often the last person to get money in their pocket.

“For every one dollar in revenue generated by the music industry, just 12 cents goes to artists,” said co-founder Sean Gardner.

“It’s no one’s fault, it’s just how the industry has been built over decades and it’s never been modernised.

“We’re creating something disruptive, allowing artists to be paid instantly as audio is consumed.”

Spotify pays artists a pittance, once every quarter. Soundcloud rarely pays anyone at all.

The blockchain-powered Emanate music platform will launch within weeks and aims to change all that, in the artists’ favour.

After 18-months of fundraising and development, Emanate is one of the most anticipated projects on EOS and the team is making serious roads into the music industry.

The aim is to work with selected industry partners to evolve the system, rather than radically disrupt the decades-old stronghold.

The idea is deceptively simple: artists can upload their music and get paid as fans listen to it.

There’s no need for exclusivity and no need for upkeep – get plays and the money rolls in from the first second.

Gardner demonstrated its potential by showing how fans can watch payments firing off on the EOS blockchain to artists in real-time.

If a listener skips part of a track, the payments stop in real-time too.

Users who curate music for others and amass followers for their playlist will soon be rewarded by participating in the ecosystem. 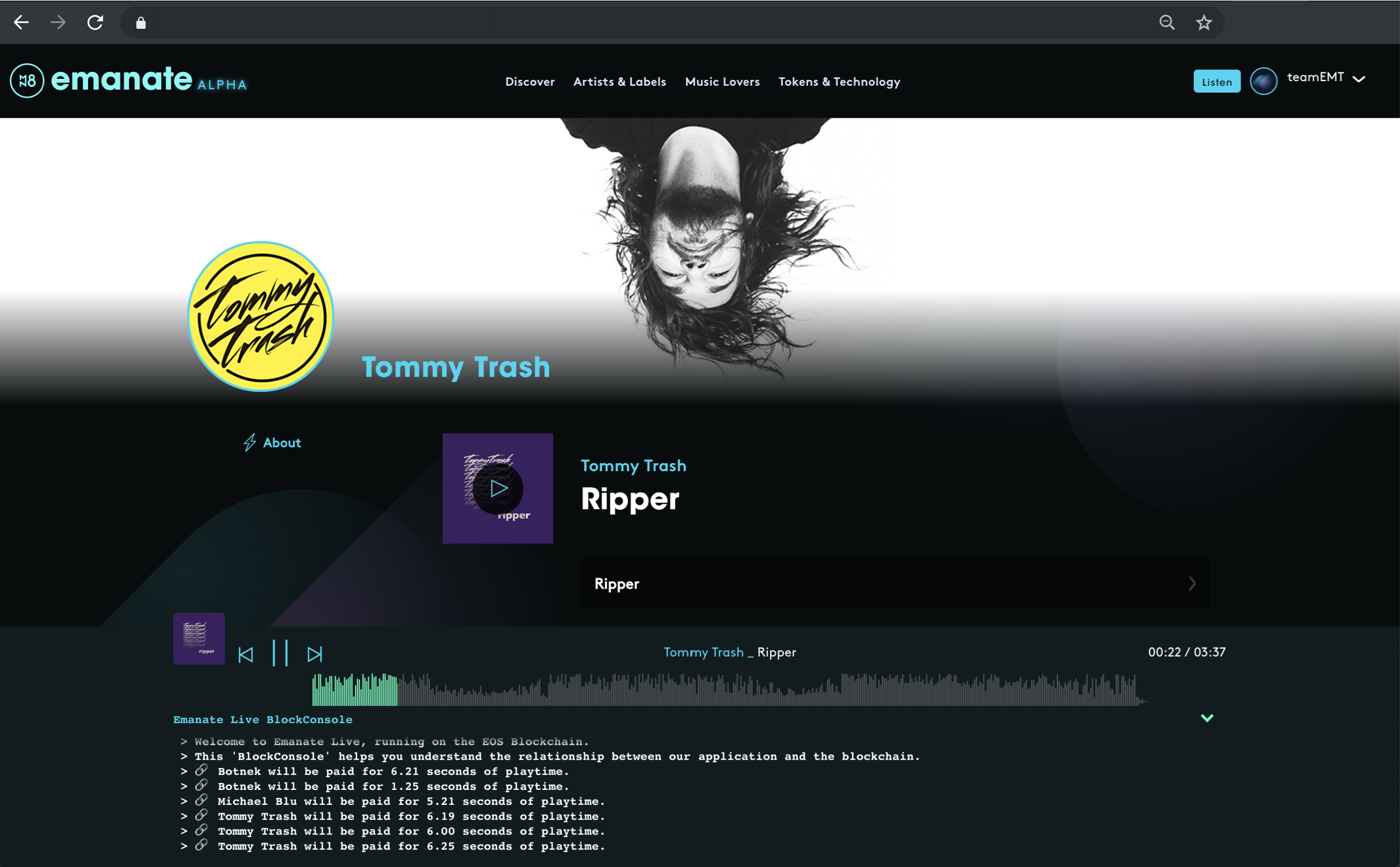 The number of transactions is huge – which is why they’re using EOS, one of the fastest and cheapest blockchains.

Emanate is also working with OCI computing, an American software developer who contracted for Block One on the development of EOS itself.

Emanate has signed a joint venture with Vampr.me, an LA-based social music app with 500,000 users – and Gardner says the team is about to unveil its biggest partnership yet.

“We’re pretty excited. We’ve just finalised a deal and have one of the most influential electronic music management groups, labels, and household names in electronic music coming on as shareholders,” he said.

Emanate has a two-token system which balances mainstream acceptance with blockchain innovation.

EMT secures the network and is staked by record labels, curators and artists. It trades on exchanges including Hotbit, eosfinex, and Bancor.

An internal currency (MNX) flows from the subscription pool to artists and royalty owners.

It’s stable, meaning it maintains a consistent value rather than swinging wildly in price like Bitcoin.

The potential to evolve streaming is massive: research from Goldman Sach forecasts revenue from paid streaming services will grow tenfold over the coming decades.

From friends to founders

Gardner was formerly the Head of Technology at marketing agency DDB Group Australia and said his interest in making the music industry fairer was sparked by his mother, a singer/songwriter.

Co-founder James ‘Jimi’ Frew, has produced, engineered and remixed for Tommy Trash,  A-Trak and Goldilox, and worked on a single music for Magic Mike and Person of Interest, while COO Trent Shaw has 15 years’ experience commercializing digital platforms and has worked with a number of major publishers and startup’s in the technology space. 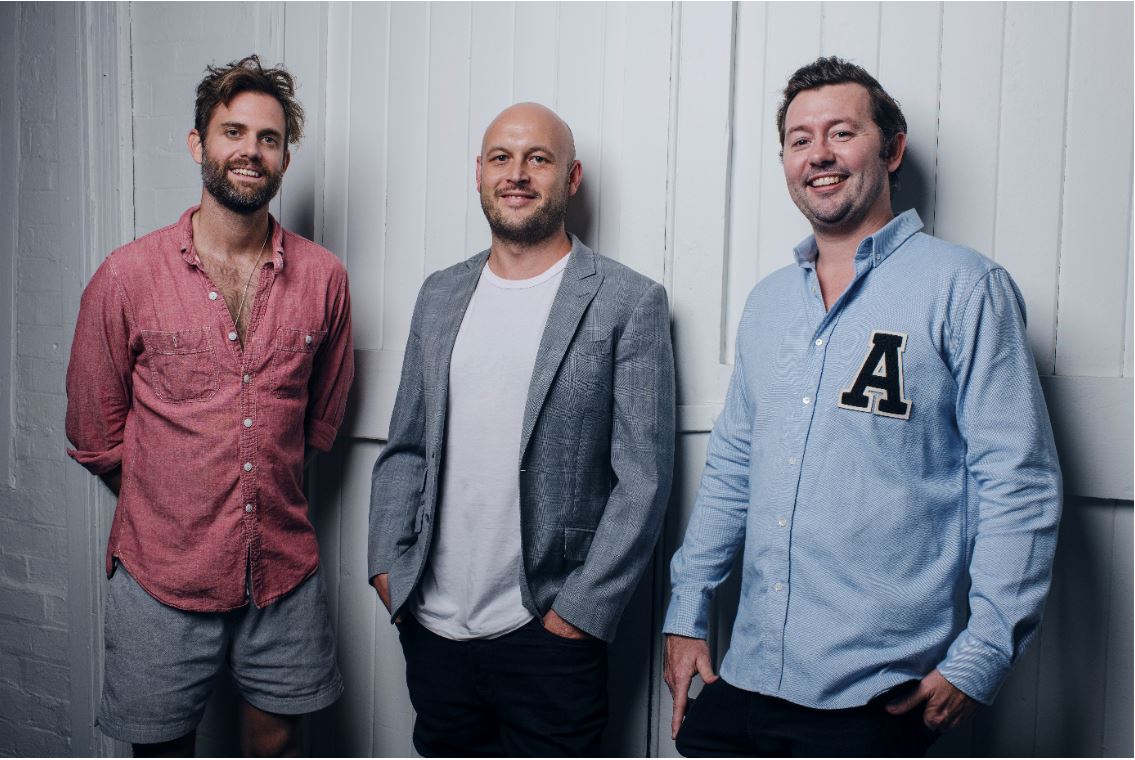 Wanna get on board?

Gardner encouraged artists who wanted to get on board to join Emanate’s Discord community where reps can help out on uploading music and sorting out contractual issues.

Gardner said the Emanate project was a perfect use case of blockchain technology.

“We’re using all of the things that blockchain has promised to solve a real music industry and social problem,” he said.

“We haven’t seen that many blockchain projects putting micropayments and smart contracts to real use on a consumer product, so I think there’s something there for people who genuinely believe in blockchain.”

Emanate’s first product release is promised in the coming weeks. A $1 million USD seed round is already partially closed.

Disclaimer: This is paid-for content and cannot be considered as investment advice. Publication does not imply endorsement and Micky is not responsible for the products, services, or claims made. Readers should do their own research before taking action on this or any other company and assume full responsibility for their decisions.

New Models Give Global Picture of Mercury Content in Oceans

Getting Ventilators to the People is a Problem Built for Blockchain

things you need to know before investing in this cryptocurrency