IOTA (IOT-USD) finds itself being sold aggressively in the crypto market, especially against BTC (BTC-USD) ratios, as it failed to hold on to a critical support area in weekend trading. Now that the critical support line has been breached, what does the immediate future hold for IOTA/BTC? This analysis piece provides some insight.

While the rest of the crypto market has jumped nearly 40% since January 1st, 2019, IOTA is down almost 20% in USD value, and much more against Bitcoin pairs and trading.

There are some bullish calls in the crypto space for IOTA, but those don’t seem to be made with much confidence. Its “tangle” technology holds promise and has secured some partnerships, but the coin’s development has been silent as of late. A new partnership to venture into supply chain tracking may change this, but the influence on price remains to be seen.

Over the weekend of April 13-14, renewed BTC strength saw IOTA take a massive beating in its trading raito. Fundamentally speaking, IOTA/BTC’s price action will continue to be dominated by the price activity on BTC.

IOTA/BTC has seen a break of the critical support line at 0.00006411 on both the weekly and daily charts, and this break has also fulfilled the 3% penetration criterion for breakout confirmation.

To get a clear view of this breakout, the weekly chart shown above has been enhanced using the zoom tool so as to show the relationship between the closing price of the just-ended weekly candle (0.00006116) and the support line which has just been broken (0.00006411). 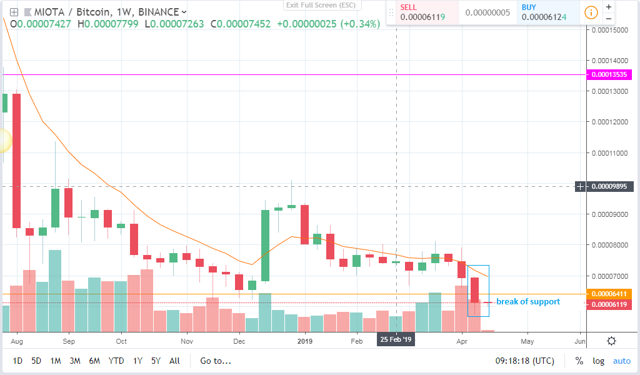 The 9EMA continues to play the role of a dynamic resistance area, and continues to turn south even as the price of IOTA/BTC continues to tank. We also see a predominance of red volume bars, which signify that the asset is under significant selling pressure.

We shift our attention to the daily chart, which also confirms the picture on the weekly chart. Here we see long red volume bars that indicate very strong selling by medium-term traders, and the breach of the identified support line at 0.00006411 is also visible. 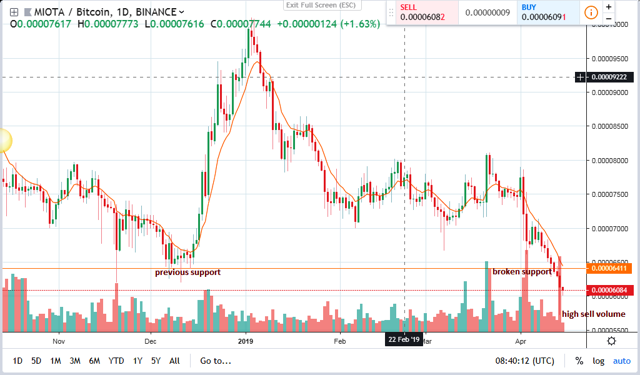 The following can also be noticed on the daily charts:

Going by the picture on these two charts, what are the possible price scenarios for IOTA/BTC going forward?

Now that IOTA/BTC has broken its key support level at 0.00006411, the door has been opened for a push towards the next support area at the 0.00001069 price area. The chart shown below indicates that this price area represents the all-time low price for IOTA/BTC, seen in 2017. Prior to the downside break, the support level of 0.00006411 represented the lowest that IOTA had traded against BTC in 2018. 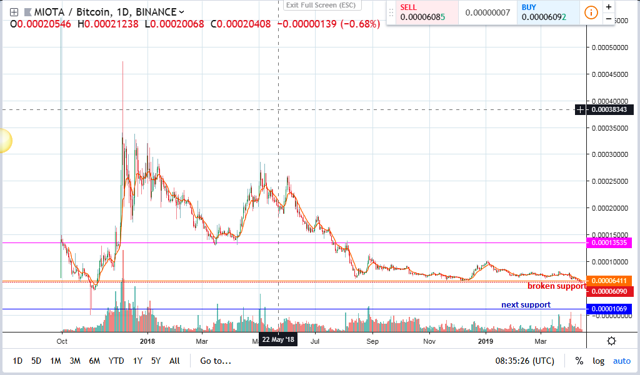 The key question now is whether the price action will attempt to pull back to the upside following this break. The 1st scenario that may be seen is that the pullback will occur and that this will happen soon. However, if there is a pullback, the broken support is expected to perform a role reversal to function as a resistance level, which will prevent the price from returning to the area above the broken support. A failed pullback will lead to a resumption of the price action in the direction of the breakout.

It is not all the time that a pullback occurs after a breakout, especially if the breakout move is very strong. Downside breaks tend to be more aggressive than upside breaks, and need not be accompanied by a massive increase in volume. However, the break of the 0.00006411 support by IOTA/BTC was accompanied by very strong selling volumes. Many times, such large volumes that push prices to break key levels continue to drive price action to the extent that no pullback is seen at all. So, it is also possible that price action will simply keep going south without experiencing any pullback.

Let’s take a look at the outlook for IOTA/BTC:

The market outlook is bearish because of the negative market sentiment for the pairing, backed up by resumed bullishness on the part of Bitcoin in early Monday trading.

Please note: This analysis piece was performed with information taken from both weekly and daily charts, where a signal candle takes a whole week or a whole day to form. Therefore, the trade scenarios described above may take a long time before the price moves fall into place.

Did you know the crypto market is up 40% since Jan 1st? Is the bear market over? Is Bitcoin going to shoot up like it did in 2017?

We provides news, research, technical analysis and more at the Coin Agora on all things crypto!

Sign up now and get instant access to our 2019 Pick Portfolio – where three of our picks are up more than 80% since January!

Disclosure: I/we have no positions in any stocks mentioned, and no plans to initiate any positions within the next 72 hours. I wrote this article myself, and it expresses my own opinions. I am not receiving compensation for it (other than from Seeking Alpha). I have no business relationship with any company whose stock is mentioned in this article.