Sia is the leading decentralized cloud storage platform where no signups, no servers, no trusted third parties. Sia leverages blockchain technology to create a data storage marketplace that is more robust and more affordable than traditional cloud storage providers.

Both the moving averages have declined since November 06 last year thereby creating downward pressure over the value as interpreted through the line in the graph above. Since current value trades below the 20-day EMA, which signifies ‘downtrend’ in value. Amid this SC shows that the bears have the upper hands as the SC/USD pair remains in bearish trends for some time until the next “uptrend” takes place. Traders and all those community users that long awaited to invest in this cryptocurrency should remain on the sideline until the next ‘uptrend’ takes place!

Let us not forget that this altcoin traded similarly with 20-day EMA and may expect to trade beyond it thereby creating “uptrend” in value. Investors may explore to create long position since then.

Now let me walk you through certain milestone that this cryptocurrency attained in the recent past. The SC/USD pair remained range bound from October 11 to October 24 last year, as the cryptocurrency rallied from a low of $0.0060 to a high of $0.0077 which is a 28 percent return within 13 days. 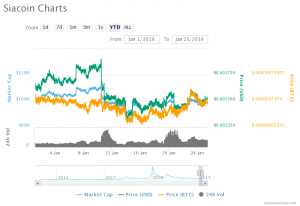 The aforesaid graph states that the Price (USD) all-time high on January 10 traded above MCap and Price (BTC). Since then it dropped dramatically and until January 11 (UTC), and from then Price (BTC) took the lead until today (05:52 UTC) where it traded above both MCap and Price (USD). Let us not forget that this altcoin experienced upward pressure on price and may expect to offer the desired outcome going forward especially when the next uptrend takes place which can be analyzed from the graph first.

While we can estimate from the first graph, if bulls succeed in rising and sustaining above the current resistance level $0.0026 (06:04 UTC) and create “uptrend” in value (i.e., traded above the EMA) the investors will start buying this currency more and more thereby increasing its value. However, based on the current trend, the next support level could be $0.0027.

Let us elaborate more about Sia where it encrypts and distributes your files across a decentralized network where you can control your private encryption keys, and you own your data. Since no outside company or third party can access or manage your files, unlike traditional cloud storage providers. On average, Sia’s decentralized cloud storage costs 90% less than incumbent cloud storage providers. With the storing 1TB of files on Sia costs about $2 per month, compared with $23 on Amazon S3 which differentiates Sia from other altcoins. Amid this, Sia distributes and stores redundant file segments on nodes across the globe, eliminating any single point of failure and ensuring uptime that rivals traditional cloud storage providers. Let us not forget that Sia’s software is entirely open source, with contributions from leading software engineers and a thriving community of developers building innovative applications on the Sia API. While using the Sia blockchain, it creates a decentralized storage marketplace in which storage providers compete for your business, which leads to the lowest possible prices!

Please feel free to visit https://sia.tech/ to know more about this cryptocurrency!

Ethereum Beat Tron and EOS in Dapp Category in Q1