Tuesday, April 9 — As major cryptocurrencies are trading sideways, Bitcoin (BTC) is holding above the $5,200 mark despite a minor decline in price. Meanwhile, traditional markets are down as United States president Donald Trump has threatened to impose $11 billion in duties on European goods.

“We’re now testing a new resistance line exactly at $5,350 […] And notice we are trading well above the 200-day moving average. This was an indicator we were watching very closely as a kind of sign whether we are in a bull or a bear market.”

According to the stats provided by CoinMarketCap, BTC has been steadily growing since April 2 — the day when the crypto markets started showing the first significant signs of recovery in 2019. As of press time, the market capitalization of BTC is over $91 billion, which is almost $20 billion more than it was before the surge. 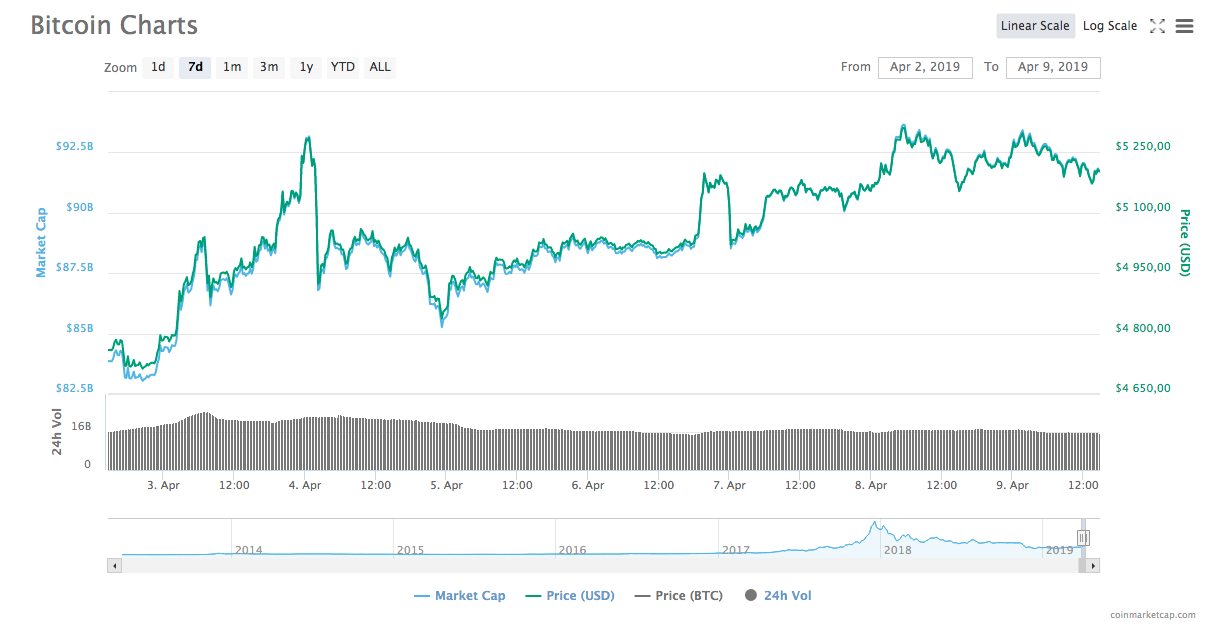 Ethereum (ETH), currently the world’s second-largest cryptocurrency, has been up 1% at the press time, trading around $177 — a slight decline in comparison to yesterday, when it saw the biggest gains among altcoins. 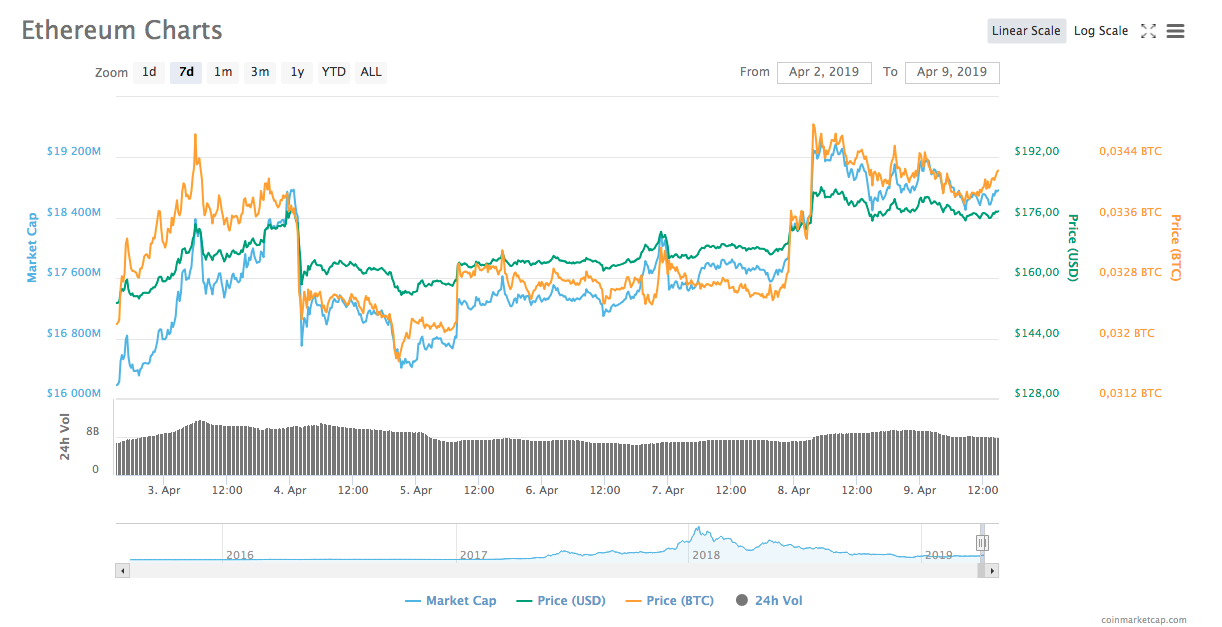 Meanwhile, third-top altcoin Ripple (XRP) is trading sideways around $0.35, in the green at the press time. Its gap with the ETH market cap has increased, as XRP now has $14.7 billion in market cap in comparison to its competitor’s $18.8 billion. 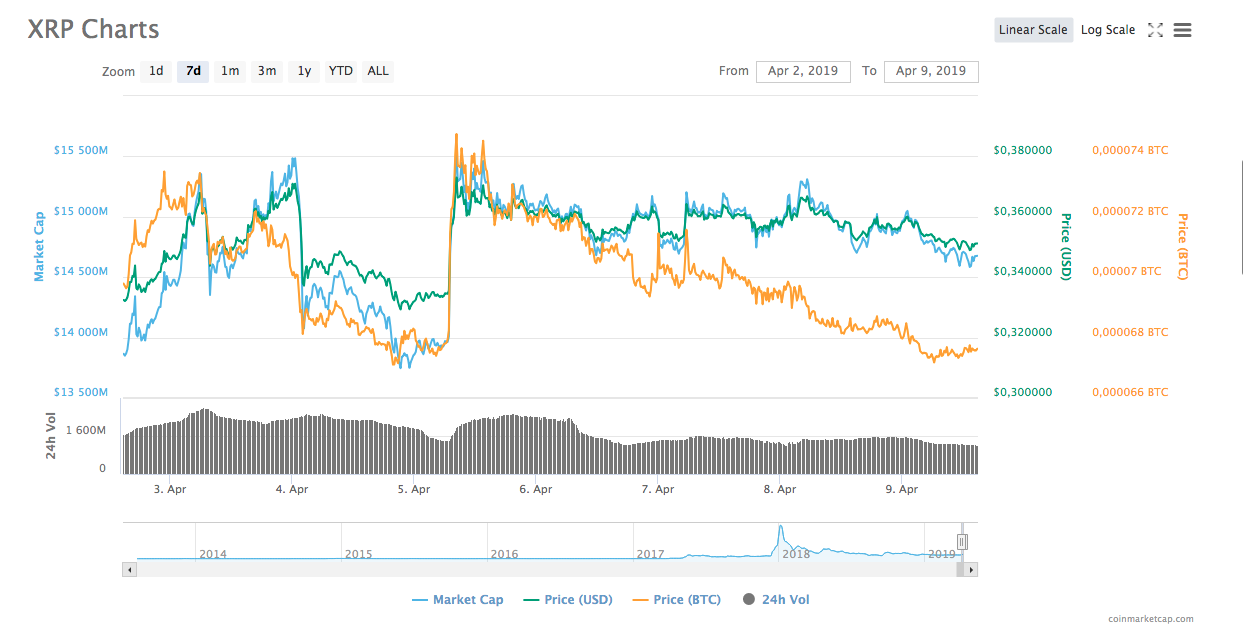 The total market capitalization of all cryptocurrencies is hovering around $180 billion, while daily trading volume is at $55.2 billion.

As for other altcoins, the top 20 cryptocurrencies are also seeing mixed signals. However, EOS and Tron (TRX) prices have increased over 4 and 8%, respectively.

In the meantime, Canada’s major cryptocurrency exchange, QuadrigaCX, has been officially declared bankrupt. The decision, approved by the Nova Scotia Supreme Court, marks a new chapter in the legal process of restoring funds that were lost following the unexpected death of the co-founder.

The United States stock market is seeing mixed signals at the press time, with the Dow Jones Industrial Average (DJIA) down 0.32%. At the same time, the S&P 500 (SPX) and Nasdaq (NASDAQ) Composite are up 0.1 and 0.19%, respectively.

According to Bloomberg, European shares gained and U.S. equity futures pared losses amid Trump’s threat to impose new trading tariffs on EU goods, ranging from aircraft parts to wine. The move comes as part of the U.S. administration’s response to the WTO’s decision on supporting Airbus in dispute with Boeing.

Oil prices are still holding at a five-month high. According to Reuters, the prices are supported by a concern that violence in Libya could further tighten the supply. As per data provided by Oilprice.com, Brent crude is trading over $71 a barrel, which is the highest price since November 2018. Meanwhile, West Texas Intermediate (WTI) crude oil is at $64.4 as of press time.

Gold prices are slightly up after hitting a one-week peak yesterday. Spot gold is up 0.8%, while gold futures gained 0.3% reaching $1,305 mark.

Ethereum Underperforms Against Bitcoin | What Next for Altcoins?