While Bitcoin price (BTC) is moving in a close range and altcoins start to move upwards, the overall sentiment of the market is still fear.

Fear is a normal expression seen from investors during downwards trending markets as traders and investors tend to be fixated by short term movements, similar to the euphoria in December 2017.

However, is it justified to have this fear checking the macro perspective of the market, or is it providing a great buy opportunity?

Bitcoin stuck in a cage

Bitcoin price action is still showing some similarities to the previous bull market which started at the end of 2015. The price is holding on to the 100-Week Moving Average, while also approaching a potential trendline marking a new upwards trend.

On the daily timeframe, resistance can be spotted through using the moving averages. As stated previously, the support right now is the 100-Week MA, while the upper resistances are the 200-Day MA and Exponential Moving Average. Notably, since the temporary bottom around $7,600, a small bullish divergence can be spotted.

A bullish divergence pops up when prices fall to a new low, while the indicator is showing a higher low. Often a bullish divergence signals the end of a downtrend. Take the following daily charts as an example of this occurrence.

During the 2018 bear market, similar signals were given during a trend reversal. A major trend reversal took place during the bottom in December 2018, when a massive bullish divergence signaled a bottom forming. After this the price reversed and started to trend upwards, temporarily ending at $13,800 on June 26.

Interestingly enough, the same bullish divergences are showing on the chart at this point, but they still have to be confirmed. Take note that the higher the timeframe where a divergence occurs, the more significant it is.

The total crypto market capitalization often provides a clearer view of the market than Bitcoin alone.

During the 2018 bear market, a clear downward trend with lower highs and lower lows was defined. In the current market an uptrend with higher lows and higher highs can be observed.

The total crypto market capitalization looks to be in a giant falling wedge (starting point the top end of June 2019) with a potential bottom forming going on right now at the previous range low of $185-200 billion.

Similar to that, the view can be defined as a potential bear trap according to the following graphic of the general market cycle. 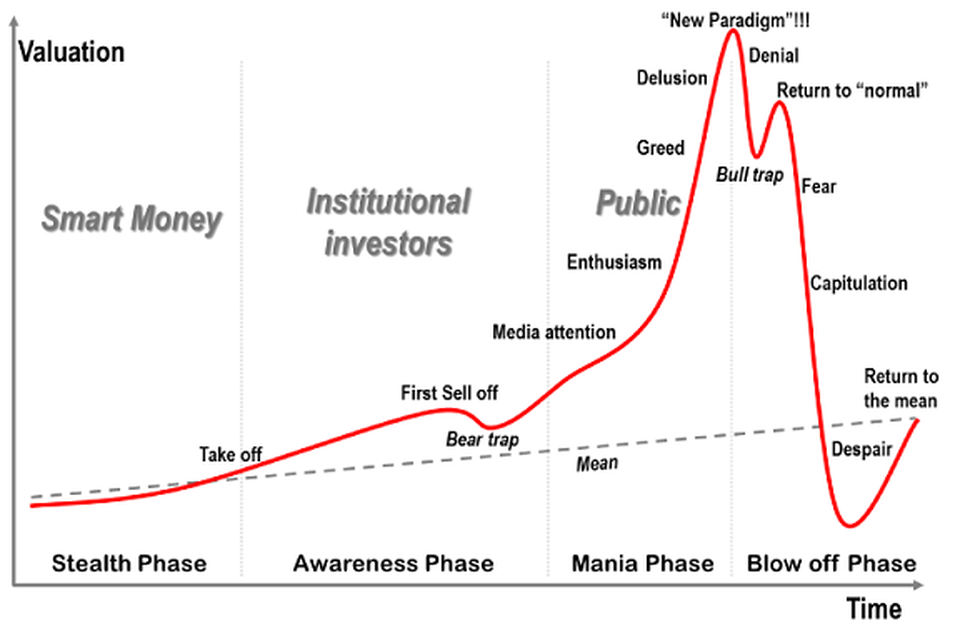 Not only is a potential bear trap is showing up here, but from a macro perspective the market looks to be retesting a few previous levels for confirmation before continuing the upward trend towards 2020.

Altcoins have been moving in both directions over the past few weeks while the total market capitalization is remaining fairly stable.

Altcoins charts show that a similar setup can be found in the recent movements. The altcoin market capitalization is resting on a pretty important order block which provided support before the massive breakout during November 2017.

Aside from the importance of this order block, a previous resistance is also being tested as support. During the first movements of 2019, the altcoin market capitalization couldn’t break above the $60-62 billion levels. However, recent movements have shown that this level can be relied on to provide support.

Keeping this perspective in mind, there is also the potential of a falling wedge structure being spotted, which is similar to the total market capitalization.

Since the rising wedge structure broke down on the Bitcoin Dominance, the level of dominance has been going down significantly. This caused altcoins to move upwards against Bitcoin. Take for example, Ether (ETH) went up 37% against Bitcoin, XRP went up 50% and even 0x (ZRX) made an increase of 175% against Bitcoin.

Zooming in on the daily time frame exposes a bearish retest and a support/resistance flip can be spotted at the 69.50% level. Given that the level flipped bearish, the dominance ate is ready for a further downfall towards 67% and potentially 65.60%.

All in all, the market is once again behaving in an interesting structure and potentially calming down before the next storm.

The main requirement for this can be found in the Bitcoin chart. Bitcoin has to hold its support of the 100-week MA and breakout upwards from this structure.

If bullish, Bitcoin will break out upwards through the range it previously moved in. Looking back on history, altcoins tend to move best when Bitcoin has found its bottom from a corrective move and starts to grind upwards. Altcoins then tend to outperform Bitcoin. Examples for this are the first months of 2016 and 2017.

A bearish scenario can be found through the following setup in which upper levels can not be flipped for support and bearish retests continue to occur. In this situation, the falling wedge won’t be confirmed and continued downwards movements are likely to happen.

On the flip side, in this scenario, Bitcoin will lose the 100-week MA and target the $6,500 and $5,500 zone for next support areas. Similar to that, the total market capitalization will be searching for stability around the $155 billion or $125 billion mark.

But in crypto, events always occur as a surprise and heavy volatility is the norm. Either way, the market is making itself ready for another giant move.

The views and opinions expressed here are solely those of the CryptoMichael and do not necessarily reflect the views of Cointelegraph. Every investment and trading move involves risk. You should conduct your own research when making a decision.